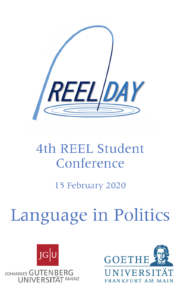 The 4th student conference on “REsearch in English Linguistics” (REEL-Day) took place February 15 at Goethe Univesity. It is a continuation of a teaching cooperation between the Department of English Linguistics, Mainz, and IEAS/Linguistics, Frankfurt, which started last year. This year, Ulrike Schneider (Mainz) and Manfred Sailer (Frankfurt) taught parallel project-oriented courses on the overreaching topic of Language in Politics.

Naomi Truan (Leipzig) opened the conference with an invited talk on The People of Parliamentary Debates: Insights and Challenges of a
Contested Concept for a Linguistic Theory of Meaning. This was followed by a total of 11 student presentations (6 from Mainz, 5 from Frankfurt).  All contributions were based on corpus analyses of political texts – such as parliamentary debates, tweets, party manifestos, political tv debates, and general language use.

The Frankfurt part of REEL day was partially funded by a Förderfonds Lehre grant Digital Data in English Linguistics.