Jamie, Sascha and Manfred’s work was the result of their intense interaction during Jamie’s visit in Frankfurt in June. In their talk “Pulling a pretence rabbit out of the hat”, they argue END_OF_DOCUMENT_TOKEN_TO_BE_REPLACED 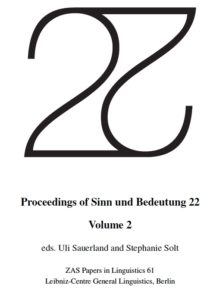 The proceedings of Sinn und Bedeutung 22 have just been published and are freely accessible for download from the semantics archive. The proceedings contain a joint contribution of the projects NRR and CON of Research Unit 1783 Relative Clauses.

This year’s annual meeting of the German Lingusitic Society (DGfS) hosted a workshop on One-to-many relations in morphology, syntax, and semantics, organized by Berthold Crysmann (Paris). The workshop comprised a number of presentations by members of the IEAS-LLF network One-to-Many (2017 & 2018). END_OF_DOCUMENT_TOKEN_TO_BE_REPLACED

Sascha Bargmann, Berit Gehrke (LLF, Paris) & Frank Richter had a joint presentation during the 19th Szklarska Poreba Workshop (February, 23-26). Sascha and Berit attended the meeting and gave a talk on “How to modify idioms”.

The talk is based on joint research initiated within the DAAD-ANR-funded networking program One-to-many correspondendences in morphology, syntax, and semantics.

END_OF_DOCUMENT_TOKEN_TO_BE_REPLACED

One day before the start of the annual conference of the German Linguistic Society (DGfS),  the society’s Lehramtsinitiative organized its  traditional information day for teachers. This year’s topic was Welche Grammatik braucht die Schule? (What kind of grammar is needed for school?). The event included a 2-hour working group on conlanging under the title Kreative Grammatikreflexion: Sprachen erfinden im Grammatikunterricht. This working group was organized by Alexandra Zepter (Cologne), Judith Bündgens-Kosten (Frankfurt) and Manfred Sailer (Frankfurt).

END_OF_DOCUMENT_TOKEN_TO_BE_REPLACED

Over the last year, the projects NRR (Non-restrictive Relative Clauses) and CON (Constraint-based Analysis of relative clauses) worked together on non-restrictive relative clauses with split antecedents. The results of this cooperation were presented as a poster at this year’s Sinn und Bedeutung, Berlin/Potsdam, 7.-10.9.2017. The poster was presented by Claudia Poschmann and END_OF_DOCUMENT_TOKEN_TO_BE_REPLACED

The concluding workshop of the Research Unit “Relative Clauses” took place May 4-6, in the Casino building of Goethe-University.

IEAS linguistics is part of this unit through the project CON, Constraint-based Analysis of Relative Clauses in English and German. This project is done in co-operation with Anke Holler,  Seminar für Deutsche Philologie, Göttingen.

END_OF_DOCUMENT_TOKEN_TO_BE_REPLACED

The program and more information can be found on http://user.uni-frankfurt.de/~tezimmer/HP_FG-RelS/windex.html 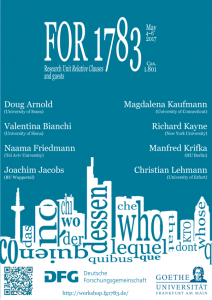 From March 23 to March 29, members of the Frankfurt HPSG community traveled to Paris as part of a co-operation with colleagues from the Laboratoire de Linguistique Formelle – see the previous post in this blog.

March 24 and 25, the 4th European Workshop on Head-driven Phrase Structure Grammar (EW-HPSG) took place. It featured 15 talks, including topics on morphology, syntax, and semantics. The workshop included the following presentations from the Frankfurt group: END_OF_DOCUMENT_TOKEN_TO_BE_REPLACED

Many members of the English linguistics team of the IEAS will participate in two events in Paris at the end of March which will be integrated in a meeting of the network on “One-to-many Correspondences”:

The workshop on the first two day includes presentations by various Frankfurt participants in the “One-to-many” network: